Back in April, we reviewed Race Condition by indie developer Ravine AB and it quickly became one of our favorite racing games. In fact, it has been one of our most played games this month. 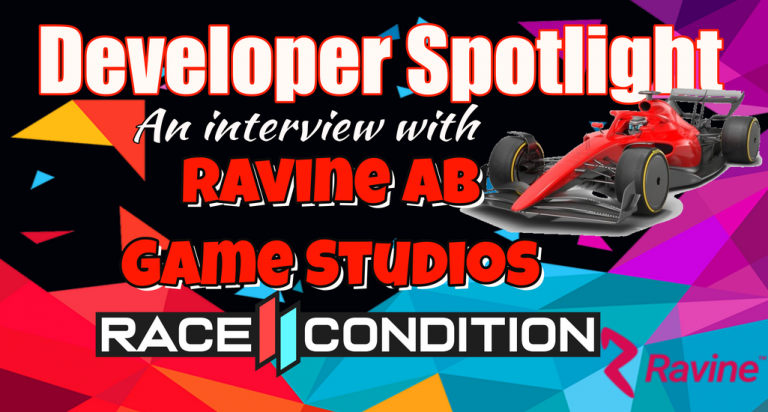 Back in April, we reviewed Race Condition by indie developer Ravine AB and it quickly became one of our favorite racing games. In fact, it has been one of our most played games this month.

Recently, we had a chance to sit and interview, Per Hemmingsson, head game designer, developer, and overall great guy at Ravine AB Game Studios. We asked him for some insight on the game’s early development, the fears of self-publishing, the current and future goals of Race Condition, and of course, the long-term plans of this talented team. Enjoy!

The Men Behind the Wheel

How did you get into game development and what was the first game you worked on?
Race Condition is actually the first game I’ve been involved in on a professional level, although I’ve worked with interactive graphics and visualization solutions my entire career. For many years I was running a company that delivered real-time space visualizations for planetariums around the world.

A lot of the technologies we applied there are actually the same as we use now when making games. My colleague Marcus has a similar background, although his career has been more focused on simulation and physics. For example, he co-founded the game physics company Meqon, which after a couple of acquisitions ended up becoming the foundation for NVIDIA PhysX.

It was our first game project after all, and we needed to have an agile approach to the development in order to create something we were happy with.

You’re most recent game, Race Condition has that Virtua Racing type vibe. What games, past or present, influenced its creation?

Much of the unintentional inspiration came from the old arcade and Amiga games, like Lotus Esprit Turbo Challenge, OutRun, Microprose Grand Prix, and indeed Virtua Racing. I say unintentional, though, because we really just had the goal to make a racing game that we would love ourselves.

The stylistic low poly visuals were chosen, not so much as a homage to the old games, but rather because we really like low poly visuals in general, and we’re a tiny team and didn’t have the manpower to create something more elaborate.

Also, we didn’t want this to become a heavy, complicated game, with deep menus full of configuration options and such. Partly this was because of our limited resources, naturally, but the main motivation was a desire to create a highly accessible game that can instantly be picked up and played. Fast loading, streamlined GUI, quick gameplay, etc. That format is quite reminiscent of many of the old classics, so I guess that also contributed to the retro feeling a bit.

Initially, the plan was to make a very “small” game. Nice driving mechanics, a few well-designed tracks, and that is about it. And I guess you can argue that that’s essentially what it turned out to be. However, even a small scoped project like that has a lot of moving parts, and I guess our biggest challenge during development was how to actually finish the damn thing.. 🙂

There was a slow but steady amount of “feature creep” throughout the project where we gradually added more things. Online leaderboards, split-screen, time trial, car setups, and story mode.. are some examples of things that we decided to add along the way. It was all very organic in that way, and while this certainly has its downsides in terms of scheduling, etc, it felt like the right way to do it. It was our first game project after all, and we needed to have an agile approach to the development in order to create something we were happy with.

We’ve been developing the game for about two years, and spent, hundreds of hours playing it. And still, to this date we haven’t gotten tired of it..

Were there any ideas your team came up with that didn’t make it to the final build?

Yes, given the open, agile, approach to this project, new ideas were discussed continuously. We tried to be realistic about things though since we knew that our biggest risk was that we’d aim so high that we’d end up never finishing the game.

Online multiplayer is perhaps one of the biggest features we decided not to do in the end. But there were many other ideas as well; other types of game modes, track editor, drivers with ragdoll physics, etc. Some ideas might become a reality going forward though, you never know!

What was it like, emotionally and/or mentally, pressing the ‘publish’ button knowing you would be sharing your game with the rest of the world?

We had participated in Steam Next Fest prior to releasing the game – and we got a lot of feedback there – so we kind of had a feeling of what the reception would be. But of course, after having worked hard for a really long time on something, you can’t help but be affected by the whole thing.

You and your team decided to create, develop, and publish Race Condition under your own label. Being an indie developer, marketing and advertising cost can take a significant amount of financial strain on your team. How was the decision made to self-publish Race Condition versus finding a publisher to offset most of the cost?

That’s a good question. In retrospect, we would probably have benefited from working with a publisher. It’s rather challenging for a two-man team to manage all the “other aspects” of making and releasing a game, especially managing marketing and social media. The reason to not go with a publisher from the start was mostly that we wanted to feel 100% free to do “our thing”, but certainly, things would have been less stressful had we gone the publisher route.

There’s no doubt you have a following that just keeps growing. With Race Condition receiving a good share of positive reviews and accolades from the gaming community, are you surprised at all the positive praise the game is receiving?

We’re mostly just really happy about it! We’ve been developing the game for about two years, and spent, hundreds of hours playing it. And still, to this date we haven’t gotten tired of it, so with that in mind we’re not that surprised there are others out there who enjoy it as well.

Then of course we have this free playable demo on Steam which I think helps quite a bit. It essentially helps filter out those who, for some reason, don’t like the game, so that we’re left with a more positive-minded group actually buying the full game. But in any case, we are really happy about the reception. It feels very rewarding indeed!

And finally, what are the future plans for your talented team? Race Condition 2 perhaps?

We’ll continue to support Race Condition and there are also discussions about porting it to other platforms. As for other plans, we have a couple of ideas, but nothing we’re ready to talk about just yet..  🙂

Thank you, Pers for taking the time to speak with us and sharing your gaming vision with the gaming world.