If you’re up for a challenge, Farlight Commanders is, far and away, a game that will push you to your limits. 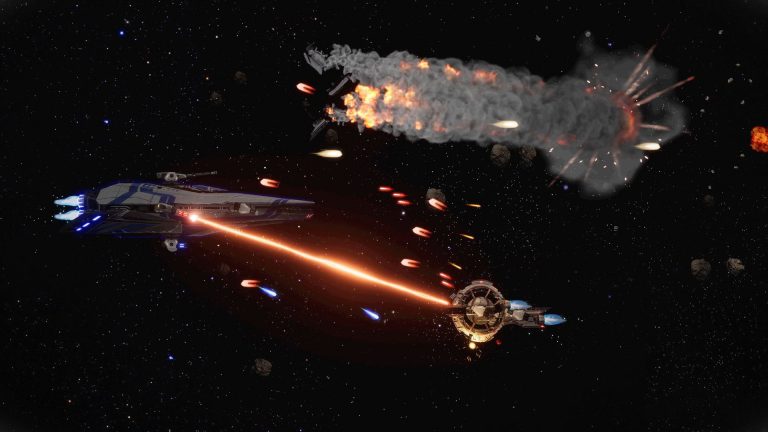 Indie developer, Farlight Games Industry’s latest offering, Farlight Commanders, is a fantastic but somewhat disconcerting game made all the more intriguing because it combines the best elements of a standard platformer with a side-scrolling shoot ’em up. It also raises the proverbial question of how effectively it does this without leaning too much on one side without it compromising the other. With that said, I’ll dig deeper into the game to show its meaty insides.

Farlight Commander is built around the classic era of science fiction games echoing the claustrophobic environment of Alien but creating a truly unique world of its own. I’m a pushover for games like this, and Farlight Commander’s seamless blend of story telling, special effects, and pitch-perfect situations make the game, quite frankly, riveting.

The plot: After many years of war, a corrupt Corporation slowly gains control of more than half of the galaxy and they are taking over every planet with a heavy hand and draining them of their precious resources. The Council, made up of colonists, is preparing to counterattack the Corporation to end their reign and to restore peace once again upon the galaxy.

There’s a cutscene at the start viewed through the lens of a closed-circuit TV which shows the obstacles and layout of the first base. Glimpses of strange plants housed inside glassed domes, ventilation shafts, and blinking computer screens litter each side of the base. What is this place? And why is the Corporation so intent on exploiting each planet?

Graphically, Farlight Commanders looks to have been inspired by a bunch of games before it. It has the platforming vibe of Raiders of the Lost Ark, the environmental aesthetics of Alien, and the visual look of Phoenix for the 3DO. The entire design is often dark and foreboding with detailed effects like steam and sparks jetting out from the vents, and the music is most stimulating and accompanies the onscreen action sequences quite well.

Cutting straight to the action, you take on the role of a Council soldier ordered to take down the tyrants. You land on one of the planets, infiltrate the base, and fight your way past enemy soldiers and gun turrets strategically placed around you. Your character can crouch, jump, and roll to minimize damage and use platforms and crates as cover.

The enemies are many but their patterned behavior is limited, but still, once they have you in their sights, they are relentless. Thankfully you are armed with a blaster that makes quick waste of anyone or anything foolish enough to get in your way. Once you clear out a level, you’ll need to make your way back to the ship, navigating through endless corridors linked to more corridors until you get to the ship’s control room. The Catharis, an old but still functional fighting ship, is the one you will pilot and it has four main components: Drive, Shield, Artillery, and Energy with each section playing a critical role in your success.

From each of the components, you can equip the Catharis with weapons, upgrades, and enhancements to make those critically needed repairs. Once you reach the control room you can set your coordinates, lift-off, and jump speed to liberate the next planet. The shooting sequence viewed from the outside of your ship may seem like an afterthought but it’s actually a nice feature that breaks up the repetition quite nicely.

While I enjoyed the game and felt vested in the story, perhaps because I could identify with the character who carries out his task with hardly a complaint, I felt ambiguously lost for the most part. You see, the game’s learning curve, while not necessarily deep, leaves a lot to be desired, at least in the first few hours of the game.

The tutorial isn’t fleshed out and some of the tasks become more cumbersome than they should be, especially when you try and take off from the first planet. I enjoyed the shooting and flying sequences but had a rough go at all the nuances the game had to offer. On top of everything else, the game touts a 4-player co-op, where each player can take charge of the ship’s main areas but since the player base is relatively low, finding at least one player to team up with can be a tough task to accomplish.

The developer has mentioned that he is making the single-player experience more robust but does claim that while completing the game with just a single player is achievable, it would also be quite challenging. Kudos to the developer, however, for sticking to his vision without having to dumb down the gameplay to please a few boisterous customers like me.

Despite these nuances, Farlight Commanders has an atmosphere that is absolutely engaging and as long as you’re willing to put some time into it, you’ll be totally vested in it just like I was, even with its shortcomings. The storyline is comparable to those of epic movies where the suspense isn’t in knowing what the next level brings, but the unknown as you get there.

Farlight Commander may be a mix of games we’ve all played before, but it does have its own unique personality, which is quite remarkable given how many games like this have been made over the last three decades. And because it touches on so many of those classics, it really feels like the culmination of those genres is well represented here. If you’re up for some challenging fun, Farlight Commanders is, far and away, a game that will push you to your limits.

Party Brawler “Rubber Bandits” Out Now on Steam and Consoles