If you like racing games or just like having a bloody good time in general, you should definitely check out Blood Rally Show! 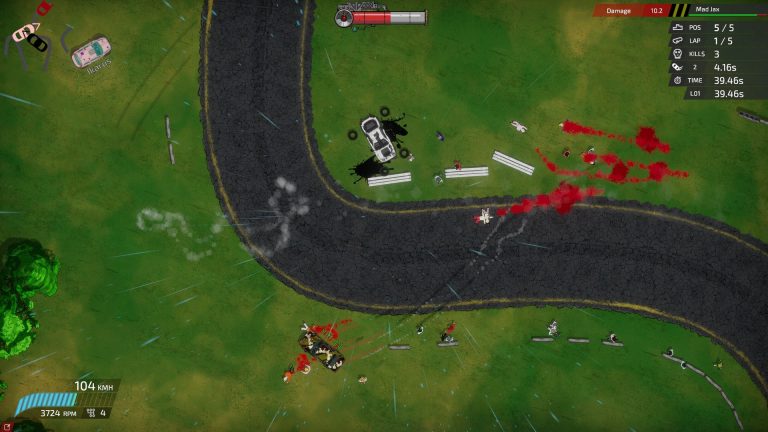 If you’ve longed for the days of Death Rally and Carmageddon it’s time to strap on your crash helmets because there’s a new racing game tearing up the roadway on the PC! Souped-up muscle cars, bouncy tracks, deadly weapons, gore up the wazoo, and some of the rowdiest music make Bloody Rally Show from indie developer Kodo Linija one heck of a driving experience!

First thing first, if you’re looking for a simple racing game to try, this ain’t it. Bloody Rally Show throws your butt on the asphalt over an infinite amount of randomly generated tracks and never looks back. Winning races earn you points that unlock more difficult tracks. You also earn money to purchase accessories for your ride like custom paint jobs, upgrades, and enhancements.

The controls are spot on and can be easily customizable in the options menu. The races are viewed from a top-down perspective making it easy to navigate upcoming turns. Unfortunately, there’s only a limited amount of zoom options available which can make everything on the track look pretty minuscule. This is especially challenging when all the cars are crashing into each other which oftentimes makes you lose sight of your own vehicle. With enough practice, however, you’ll be drifting around like a pro and taking out your opponents like Mad Max in no time.

Get Ready for Some Rowdy Racing!

The colorful retro-inspired graphics gives Bloody Rally Show a rather unique and distinct look. Adding to the excitement of the races are all kinds of dangerous obstacles placed along the tracks including oil spills, water puddles, ramps, and exploding barrels. If you’re a cautious Sunday driver, it would be best if you just stayed home! The pedestrians and on-lookers that line up to watch the races aren’t just there for eye candy either. They cheer on their favorite drivers and scramble out of the way from any wayward cars. Among the more unique features of the game is the ability to earn nitro by — gasp! — running over pedestrians. So if you need to boost up the speed, just take out a few onlookers in the process. I expect someone, somewhere will make a fuss about this type of violence, but I know for sure it won’t be me.

While Bloody Rally boasts wonderful graphics, the soundtracks explode with supercharged techno riffs that will put you in a high-octane mood from the get-go. Little touches like skidmarks, bloody tire marks, and alteration in the handling and feel between grass and pavement add to the immersion factor.

Despite my praises for the game, there are several scuffs that blemish an otherwise great paint job. First, the cars seem to slide way too much. The slightest nudge from your opponent will send you careening off course. Second, the speed of the cars feels a little slow even with nitro enabled making it as if the cars are driving through molasses instead of dirt or gravel.

But these few problems never eroded its addictiveness nor did it stop me from playing and having a great time. Bloody Rally Show is clearly a labor of love from Kodo Linija and it shows in its entire presentation. The clever mix of action, arcade, and refreshingly fun gameplay should appeal to anyone looking to put their foot to the pedal.