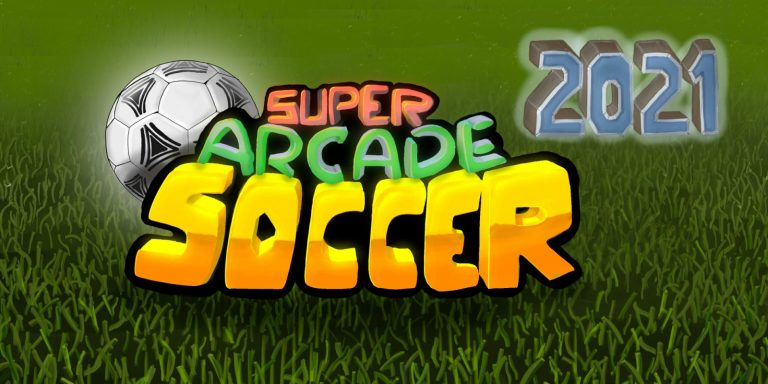 Any game developer that dares to create a soccer game faces the rather formidable obstacle of being compared to EA’s FIFA or Konami’s Pro Evolution titles. Let’s face it, very few soccer games, whether on console or PC, captures the perfect blend of gameplay, finesse and simulation qualities as well as FIFA.

But in an unconventional move, Super Arcade Soccer 2021 by developer Ruben Alcaniz doesn’t rely on big-time graphics or a million-dollar presentation. Instead, it takes on a pure and relentless arcade approach and entices the entire soccer community to give it a shot.

While a keyboard is an option, I highly recommended you use a controller to get the most out of the title. While the game utilizes almost every button on the controller, players have limited moves besides passing and shooting. But honestly, you really don’t need much more than that when the object of the game is to pass, shoot, and get the ball inside the other guy’s net.

If anything more were added, it would just complicate things and take away from what the developer had in mind for the game. While there might not be a host of options to choose from, this quick-playing game handles well and is easy to pick up and play.

While the players aren’t very detailed, the running and shooting animations are pretty darn good.

who you calling a foot soldier?

Graphically, the smooth camera works the field and gives a good sideline perspective of the action. While I preferred the default camera view, I did notice the view never panned out far enough to my liking since it made it somewhat difficult to see what was ahead of me. This was especially true when making long passes because I was unable to see where the defenders were.

While the players aren’t very detailed, the running and shooting animations are pretty darn good for a one man developer. Goalies seem to have the most animation like raising their arms to block a shot or making a diving save or a deflection. The sounds are serviceable and add a nice layer of ‘ooohs‘ and ‘ahhhs’ depending on what’s happening on the field. Unfortunately, there isn’t any commentary which would have increased the immersion factor by quite a bit. The sound effect and stadium ambience, however, does a good enough job at keeping the adrenaline pumping throughout the match.

However, if you prefer to play games that are quick, fast, and reminiscent of past arcade games, then Super Arcade Soccer 2021 might be what you’re looking for.

But as good as Super Arcade Soccer 2021 is, it does have some quirks in the gameplay. For one, your AI opponents seem pretty content to stay back when an attacker is coming right at them. They do react, however, when a player triggers their line of radius, but it looks odd and doesn’t give a sense of urgency that is usually associated with real soccer. Also, defenders have a knack for getting back into a defensive formation instead of reacting to the play. It’s not a game-breaker for me, but I can see this being an annoyance to others.

Of course, hard-core soccer fans may find the game entertaining but ultimately lacking. Along with the diminished simulation features, the lack of realism may turn off even casual fans of the sport. However, if you prefer to play games that are quick, fast, and reminiscent of past arcade games, then Super Arcade Soccer 2021 might just be the game you’ve been waiting for.

May the 4th Be With You