Booting up Hyper 5 was like being twelve years old again running home from school to catch the final minutes of Starblazers, Speed Racer, and Voyage into Space. 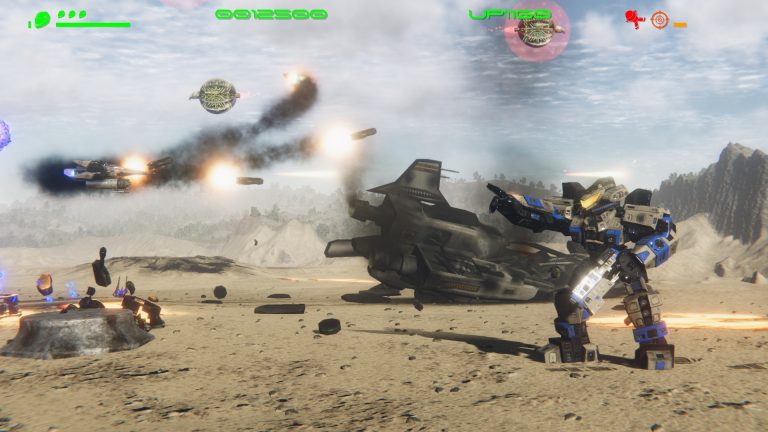 Booting up Hyper 5 was like being twelve years old again running home from school to catch the final minutes of Starblazers, Speed Racer, and Voyage into Space. Like those iconic programs of the past, indie developer Hyper Productions uses the latest 3D technology to pump up the reputable subject matter of the shoot ’em up to Hollywood blockbuster visuals. The game’s main selling point here is its over-scaled action sequences that make the special effects in most movies pale in comparison.

In a terrifying future, a Hyper 5 scout ship responds to a distress beacon. Starting off only with standard lasers and missiles, the scout ship makes its way through lush levels taking aim at the spindly-limbed, whale-sized beasts that emerge from both the sky and from the ocean floor.

The gameplay itself follows the formula of traditional shooters but with a few caveats: the gameplay is often too zoomed-in for my taste, and destroying enemy targets takes too long, particularly when forced to move forward making any attempt to completely clear the levels of enemies non-existent.

The pace is also somewhat slow which is considerably noticeable and hinders the fever pitch frenzy we expect from traditional SHMUPS of the past. There is a ‘Precision Mode’ feature that increases the speed slightly, but even then, it still felt slow. Adding some form of scrolling to the background might increase the sensation of speed, so I’m hoping this is something the developers can implement.

Nitpicks aside, the visuals, which by itself will sell the game, are astonishing. They split the difference between classical shooters and the blurrier, more chaotic modern 3D design in a way that makes me appreciate the values of both.

Some of the whirling action has a geometric beauty that closely resembles Abstract Impressionism and each level contains a few surprises: a tactic you haven’t tried, an upgrade you didn’t know about, a gameplay element you didn’t see coming.

Hyper 5 is a game with more emotion than its early trailers could have led you to expect. Playing the first few levels made me feel like a kid again, but acknowledging the fact that I was playing a game in the modern-day setting. I guess that’s why I’m so fond of shooters as they are a part of our experience, our history, and our personal window to a time that has long since passed.

The new shooters that are being released now are as compelling as the familiar ones because they remind us that the more things change, the more they stay the same. I’m definitely optimistic that Hyper Productions will continue to improve and tweak the gameplay to make Hyper 5 the best it can be.

Thanks so much for your review of the demo of Hyper-5. I really appreciate your time trying the game and I will continue to improve and refine my game!

Ready to make a stand? Age of Darkness Makes it to Steam Early Access

Stellar? Not Quite, But Close – Stellar Warfare (Steam) Review