Operation STEEL is a shoot-em-up that uses hand-drawn art to create a game that’s as fun to watch as it is to play. 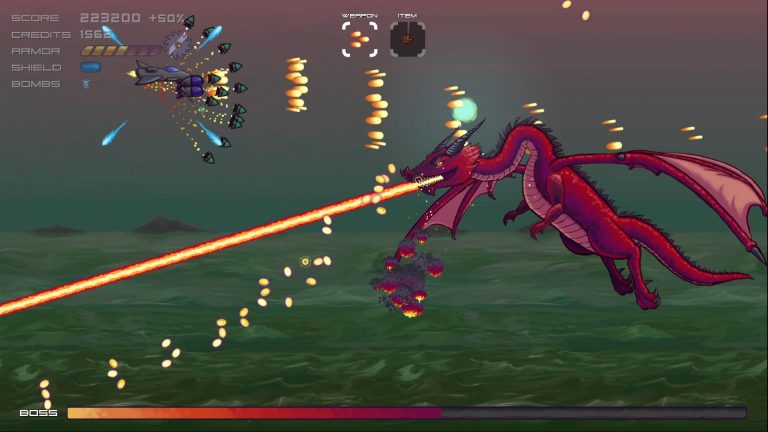 Think you’ve played difficult games before? Operation Steel will melt your face with its fast-paced gameplay, psychedelic visuals, and challenging boss battles. It’s all rendered in beautiful hand-drawn retro-inspired graphics perfect for those intense, but short, gaming sessions. Ready to get your heart pounding? Then jump into the cockpit and let’s go!

Operation Steel, by developer Undermog Games, combines the unforgiving nature of shoot ’em up (SHMUPS) with a difficulty that can churn the stomach of even the hardest of veterans. Be forewarned: you will die, but you’ll have an amazing time doing it. With over twenty procedural levels, RPG-styled upgrades, and massive end-bosses, each level features gorgeous graphics, a cool soundtrack that nicely accompanies the action, and hundreds of scrolling flashes of sprites on-screen without any flicker or slowdown in sight.

A Shooting Game That Shoots Back

Viewed from the traditional side-scrolling perspective, you control a craft that has to dodge and blast away at enemy ships. Zig-zagging your way from left to right, you’ll feel the tension immediately as wave after wave of alien invaders make a beeline to take you down reminiscent of some high-tech annihilation movie.

Destroyed ships drop coins and power-ups that you collect and can be used to upgrade and enhance your ship and its arsenal. And believe me when I say you’ll need every powerup you can get your hands on as the game’s challenge will test your resolve.

Many of the levels are beautifully rendered with soft hues which makes them look like they were painted on with a fine brush rather than with a 3D graphics program. Here, you can see the little touches in the background as the clouds pass over the hazy sun or the light reflecting off the shimmer of heat in the desert areas. The overall effect is one of relaxation and peace, offering a place that feels both tranquil and dangerous.

To be a successful game, the controls need to be tight and responsive and Operation Steel requires only a few buttons to use: one for your primary weapon, and one for your secondary. It will definitely make you appreciate just how simple it is to get into the game. Shooters don’t come any simpler than this!

A Loving Throwback to the Classic Arcade Days

In addition to the normal game mode, Operation Steel offers Time Attack and Boss Rush modes which adds a nice variety to the gameplay. My only caveat with the game is two-fold: for one, it’s short and two, the lack of continues often has you replaying the start of the level instead of where you left off.

Despite these minor grievances, Operation Steel offers the firepower to challenge even the most seasoned shooter fans. With its frantic gameplay and an impressive variety of enemy bosses, it’s easy to see why Operation Steel will be enjoyed by many, even if its core mechanics are essentially the same that has existed since the days of R-Type and Gradius. Still, it’s s a fun little game that shooter fans will enjoy from start to finish.

Keep Jumping! Kao the Kangaroo Demo Out on Steam Fest