If you enjoy soccer games that are fast and frenzy with awesome graphics and pumping sound effects, then Pixel Cup Soccer: Ultimate Edition is the game you need to get your hands, err, feet on. 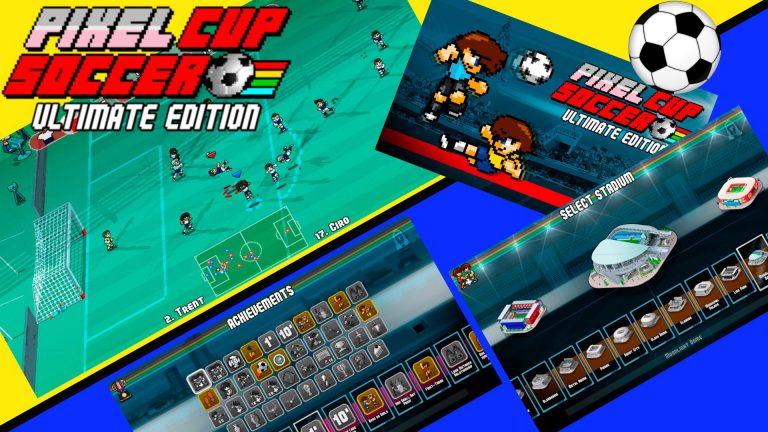 Chalk up a victory for Batovi Games Studios for their latest offering, Pixel Cup Soccer: Ultimate Edition. What this indie developer has done with arcade soccer is equivalent, in my humble opinion, to what the FIFA series has done for soccer simulation.

Pixel Cup Soccer: Ultimate Edition has fantastic graphics, cool sounds, and some of the most exciting arcade gameplay this side of the Atlantic. Simply put, this is already my favorite balls-to-the-walls soccer game since International Superstar Soccer for the SNES.

The game boasts an extensive amount of features for such a small game, including three modes of play: Friendly, Competition, and Penalty kicks. There’s also an impressive array of matches that run the gamut of options, like Men’s and Women’s Global Cup Matches, American, European, and Global Cup Modes, as well as the ability to create your own Pixel League Tournaments. Pixel Soccer boasts so many features that you’ll find yourself playing long after the actual season is over.

Aesthetically, Pixel Cup Soccer’s graphics are top-notch especially if you favor the nostalgic retro look and feel of past games. Player movements, while not lifelike, are fluid throughout as they execute some impressive diving headers and overhead bicycle kicks. Special abilities like jumping over defenders, add variety to the already impressive list of animations. The playing field is viewed from the traditional side-line perspective allowing gamers to see the entire field and set up strategies and tactics to exploit the opponent’s defenses. There’s also a cool instant replay that pops after each goal that you can rub in your opponent’s face.

But what’s soccer without all the crazy fans, the roar of the crowd, and the pumping atmospheric sound? Don’t worry, Pixel Cup has got you covered. Close your eyes and you’ll think you’re in an actual match. You’ll hear great crowd reactions to diving saves, near misses, and when you hear the clank of the ball as it ricochets off the goal post you’ll be clutching your controller like Donald Trump holding on to his tax returns. It’s moments like this that can trigger your pulse to skip a beat.

Controlling your player has never been easier as the game utilizes three buttons for quick passing, shooting, and special abilities, which makes it extremely intuitive to pick up and play. I know most gamers will moan about the lack of buttons being used, but for me, it feels just right.

The only minor issues I have with the game are two-fold: One, the AI defenders do not always do a great job of defending which makes for a lot of open-shot opportunities. Second, the goalkeeper’s reaction time needs to be improved or sped up. Oftentimes, when the goalies make a save, they don’t react fast enough to make another save, especially when the ball is still in play and bouncing around right in front of them, which results in quite a few easy goals. Of course, these issues are resolved when playing against another person, but it does cheapen the single-player experience a bit.

These drawbacks, however, are minor compared to the game’s overall strength. If you enjoy soccer games, especially those from the 16-bit era, that is fast and frenzy with awesome graphics and pumping sound effects, then Pixel Cup Soccer: Ultimate Edition is the game you need to get your hands, err, feet on. It’s that good.

Once You Re:Turn, There’s No Going Back