TL;DR: Tired of games that are all flash and no substance? Here’s proof that a game doesn’t have to push the technological envelope to be fun. desert warfare There’s no denying that Sands of Salzaar … 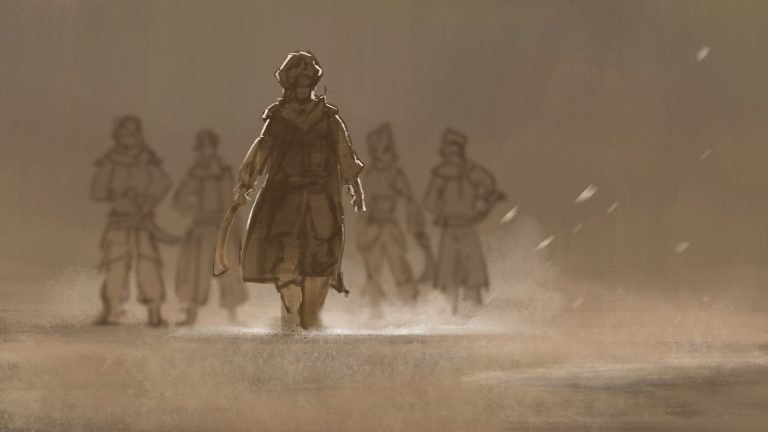 There’s no denying that Sands of Salzaar has a wealth of innovations in many of its in-game concepts. But scratch away the sandstone and you’ll find a somewhat rudimentary RTS game. The title balances a number of very appealing but frustrating features to create a love it -or- hate it experience. One of the most striking aspects of the game is in its look and feel an opulent treat of lush environments and imaginative factions set in a mythical Chinese world. Smooth movement and fluid animations create realistic units with a wide range of actions and movements. The beautifully hand-drawn graphics is certainly one of its best features, but even here, there are small issues. For a game that focuses on large-scale battles, it seems rather odd that you cannot zoom out from the limited viewing area.

The different factions you can join offer a good mix of units, each playing quite differently from one another. Recruiting and training your soldiers, then giving them their own unique abilities is one of the most appealing things about the game. Instead of building huts to train recruits, you can join factions or create allegiance with other clans in order to control their henchman. Foot soldiers, archers, simple farmers, and pets can wield you a very interesting mix of forces.

Recruiting and training your soldiers, then giving them their own unique abilities is one of the most appealing things about the game.

you got sand in my chocolate

There is certainly no shortage of gameplay options in Sands of Salzaar. The title offers a custom multiplayer test arena, custom battles, and a lengthy but robust open world campaign. The campaign allows you to make vast choices about areas of the map to explore and whether to follow the main quest or branch out into the dozens of side quests littered all over the map. As I mentioned earlier, the game world is vast and offers a new adventure each time you play.

Exploration is the name of the game and is reminiscent of that in Mount and Blade. You wander around looking for ideal places to settle, explore, and even raid. Along the way, you’ll encounter groups of bandits and opposing factions that you have the option to fight alongside with or against. If you choose to do battle, you’re thrown into an over-the-top view of the action. Here you can view the skills and abilities of your hero and forces. This is the part that is a hit and miss for me. On one hand, watching your hero decimate a group of enemies using a head-bashing AOE is exhilarating, but watching him run around taking swings at enemies and missing, is not.

As is expected from this type of game, there’s a lot of dialogue to go through. At times, it can be cumbersome to start a chat with an NPC then have to click and click just to end the conversation. Though I am inclined to read through most, if not all the back and forth dialogue, a lot of it becomes long-winded. The music, however,?does a very good job of setting the mood and changes dynamically depending on the situation. Overall, the developers have done an exceptional job of keeping the players immersed in this fantasy world.

Exploration is the name of the game and is reminiscent of that in Mount and Blade. You wander around looking for ideal places to settle, explore, and even raid.

an oasis in the desert

But with all the proverbial good, there are a few grains of sand that are keeping the gears from running smoothly. For one, the battle mechanics can be lackluster at best. As I’ve mentioned earlier, attacking your enemies is fun to watch, but watching your hero make a heavy strike and miss, is not. Second, the AI seems content to scatter around the screen instead of staying in formation. This is true for archers who’ll run wildly towards the edge of the screen, unable to fire back because they’re locked in their animation. Third, the dialogue can be lengthy, and not having a button to end the conversation means you’ll have to click and click your way to the end. And last, there doesn’t seem to be a decent waypoint to use to get you back on the main quest.

Despite these trivial points, Sands of Salzaar is a rather unique game with a wealth of potential. If the development team can tweak the issues above and add a few more dynamic events, like being able to watch different AI factions fighting to control a town, this would certainly catapult it to the upper echelon of strategy games. In fact, it has all the ingredients needed to become one especially given the large array of RPG elements built inside its core mechanics. As it stands now, Sands of Salzaar is a fun game hampered by a few nagging issues. It’s rough around the edges, but with some good old fashion spit and polish, it might just become the shining jewel of the desert.