Taxi Chaos is a breakneck drive and chase game about the daredevils who work as city cab drivers. 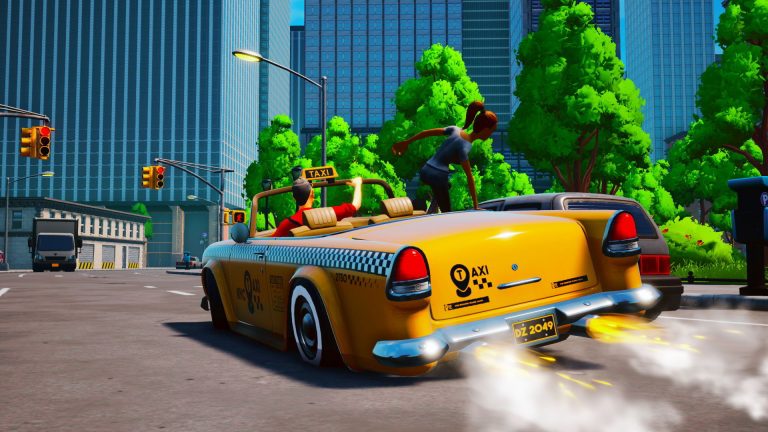 Taxi Chaos is a breakneck drive and chase game about the daredevils who work as city cab drivers. With a map of the city imprinted in their brains, they hurtle down sidewalks, run red lights, drive against traffic, jump obstacles, and insist on using the gas pedals without brakes. Whatever they’re paid, it’s not enough. If one of these cabbies hits a baby carriage at a crosswalk, for example, they’ll only see it as another bump in the road.

The game is a reference, of course, to Sega’s Crazy Taxi, and the wildly fast gameplay means the more riders you can pick up and entertain, the more money you make. The two characters may not be deeply drawn, but you have to look fast to see them. Crisp, bright colors are used to make each level pop and everything about the city to the obstacles on the sidewalks is created with amazing clarity.

For those unclear about the concept, the object of Taxi Chaos is to pick up customers and get them to their destinations as quickly as possible. But just getting there isn’t enough, you’ve got to do it in style. Jumping and driving atop buildings and threading the needle between two lanes onto incoming traffic is just not common practice, but the accepted conventions on how to drive.

Despite all the good things going for Taxi Chaos, there are a few nitpicks I want to get out of the way. First, the vast city, as one would expect, should be filled with pedestrians, stragglers, and people generally mulling around. Taxi Chaos offers very little of this and it often feels barren and empty. Add to that the sensation of speed at which you drive is much slower, so getting past obstacles or incoming traffic is much easier, and less thrilling than it should be.

Taxi Chaos might have had more effect if its character had possessed more personality, but the title pins its effectiveness mostly on aesthetics, location, and nostalgia, to keep players interested in the game. And the developers, Team6 Game Studios, understand that their game isn’t to re-invent, but to reimagine, what Crazy Taxi could be if developed by someone other than Sega.

But my biggest criticism, however, of Taxi Chaos is it lacks depth. I can do without the hyperbole announcer in the original but when this is missing in Taxi Chaos, it makes everything seem even less exciting.

While Taxi Chaos has the paint job and sports some neat aerodynamic curves, it ultimately lacks the depth and fun that the original Crazy Taxi had. As it is now, Taxi Chaos never touched me emotionally the way the original did, but it does, however, provide a decent gaming experience for those looking to rekindle their past.