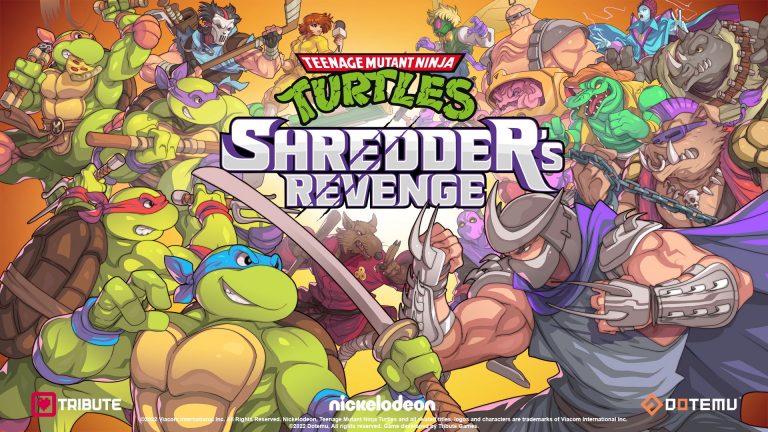 Ah, the 1980s. It’s a decade that seemed like a million years ago. The Lakers and Celtics dominated the NBA, the 49ers and the Bears were creating a football dynasty, and I got a chance to play my first Teenage Mutant Ninja game on the NES. Life was good and simple then. Oh, how I miss those days…

Happily, I still have the original cartridge tucked away somewhere in my closet and I don’t have to go searching for it to play, now that DOTEMU and developer, Tribute Games have released Teenage Mutant Ninja Turtles: Shredder’s Revenge on the PC. For those of you unfamiliar with DOTEMU, they are a developer/publisher based in France specializing in reviving classic games.

The story follows the adventures of the Turtles on what turns out to be a very bad day for them as the dastardly duo, Bepop, and Rocksteady, commandeer TV stations across the state. The turtles, looking to bask in their glorious past, are tasked with stopping these cowardly duo and bringing law and order back to the land.

But it won’t be easy as Shredder’s minions are in full force ready to once again stop our heroes in their tracks. And Just like other side-scrolling games of days past, players must make their way across the multi-faceted levels in order to reach the lair of King Krang and put an end to his shenanigans once and for all.

Teenage Mutant Ninja Turtles: Shredder’s Revenge was obviously built around familiar locations as it depicts the city and its subway system at its bleakest, dirtiest, and at times, most violent. But the Turtle boys, who lived much of their lives in the underground sewer systems, feel right at home under such circumstances.

The gameplay prides itself in its nonstop side-scrolling action reminiscent of past brawlers including, Streets of Rage and Final Fight. You can play solo or in multiplayer mode with each player choosing to take on the role of either Michelangelo, Raphael, Donatello, or Leonardo. While the game can be beaten by a single player, much of the fun comes from Turtle power teamwork. So if you have friends laying around, the multiplayer option is definitely the way to go.

But don’t think for once that the fight is going to be easy. From the opening level, Shredder and his goons are right up in your face. Thankfully, when the going gets tough, the Turtles get tougher. Each of the shelled heroes has perfected a few new moves of their own to keep the bad guys at bay.

From familiar patented flying kicks to their ninja-weapon-wielding combos, everything seems to be in place. You can also clean out a screenful of enemies by unleashing a few deadly combos which are especially effective when your Turtles are surrounded.

While the levels are short, they provide enough variety to keep pace with the action onscreen. Levels range from back-alleys, arcades, zoos, and even a nifty skateboarding chase scene that has you doing drop kicks against a bunch of truck-driving goons. Destructible environments like trash cans and fire hydrants reveal health and power-ups, and they’re not there for show either; kicking a shopping cart, for example, makes it take off like a missile and wipes out all enemies in its path.

One thing you’ll notice immediately about the game, from a visual standpoint, is how retro it looks, and that’s not necessarily a bad thing. The animations are smooth and fluid and are reminiscent of those found in the original cartoons. Teenage Mutant Ninja Turtles: Shredder’s Revenge wasn’t remade with big 3D effects in mind, and to be quite honest, it doesn’t need to be because of its simplicity and would not have felt right with massive effects attached to it.

Perhaps the most profound critique that can be made about Teenage Mutant Ninja Turtles: Shredder’s Revenge, however, is how dated the gameplay feels today. Sure, it’s fair to say that it plays very much like a game of its time where two-button controls, 2D sprites, and techno beats were all that was needed to make a game. But what was considered innovative or even cool back then merely seems more of curiosity by today’s standards, especially from the younger generation of players.

You see, even one of the game’s biggest assets, the much-praised fighting sequences, seemed somewhat tame when comparing them with many action platformers today. But for someone like me, who grew up playing TMNT games on the NES, this game brings back a lot of memories, and this one, in particular, is just as good as I remembered it to be.

What makes Teenage Mutant Ninja Turtles: Shredder’s Revenge stands out however is its energy, its original oddness, and the way it touched a nerve of nostalgia. This game may not be for everyone, and that’s perfectly OK, but it should not be neglected because of the way it looks or the duration it takes to complete it.

But the big question you should be asking, is “will I have fun?” Let’s just say that the Turtles have made their mark, they’ve entertained audiences for over three decades, and they are well-remembered and loved, especially by those of us old enough to watch their debut back in 1987. And that my friends, is more than enough reason for me to recommend this game.