Willy Morgan and the Curse of Bone Town PC Review 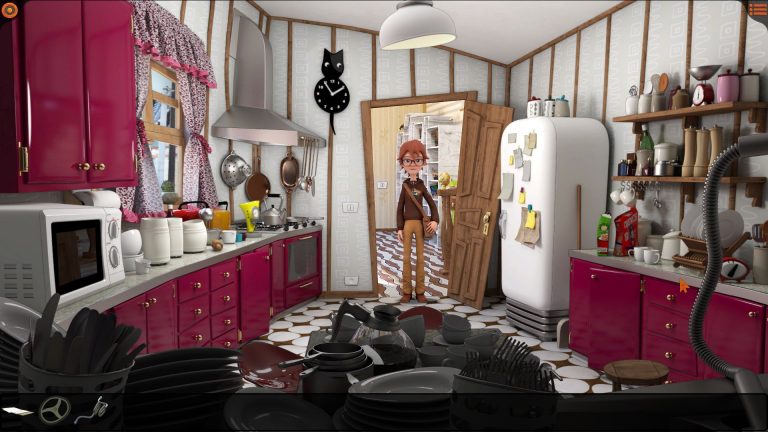 bad to the bone

While cartoonish hand-drawn point and click adventures are like kryptonite to most gamers, Willy Morgan and the Curse of Bone Town by developer Imaginary Lab manages to avoid the many pitfalls of the genre to deliver an enjoyable gaming experience with an interesting story with sharp colorful graphics. The backdrop places the player as the diminutive Willy Morgan who goes out exploring the mysterious city of Bone Town in an attempt to track and locate his father’s whereabouts. Find the father, as the description says, and you’ll unlock the secrets of this mysterious place.

Bone Town is a scathing little pirate haven that hasn’t really evolved with the passing of time. The Innkeeper’s shop, for example, looks as if it hasn’t been renovated for years. Barrels of liquor still line the backdrop of the old bar, and the innkeeper himself is reminiscent of the pirate brutes found in many dilapidated bar rooms with the only thing missing is the parrot that sits on his shoulder. While the locations aren’t exactly grand in exploration, they remain hauntingly fascinating as you devote almost two-thirds of the game to exploring them in an attempt to solve its inner secrets.

It’s hard to forget that the majority of all games have looked great on paper then fail miserably on execution. Thankfully, Willy Morgan and the Curse of Bone Town did not disappoint.

The actual gameplay doesn’t stray too far from traditional point-and-click games, but it does introduce players to a host of interesting characters and puzzles. You move around, look at objects, and place them in your inventory using the mouse and a context-sensitive cursor. First on the agenda, is finding all the pieces of a bike so you can ride into town to start your adventure. Visually, the game is stunning to look at. The animated graphics are crisp and clear and the artwork is outstanding. While the graphics may not be as realistic as those found in Life is Strange, the unique character caricatures more than makeup for it.

Like so many games of this nature, one often ends up having to ‘hunt the obvious objects’ when searching for important clues. Thankfully, the game resolves that issue by allowing players to press the space bar to highlight essential objects on the screen. However, some items need to be paired with one another, and thus, puzzles become a mine-sweeping exercise in finding the right combination to solve. But it’s the hunt and discovery that makes the gameplay so endearing.

The production quality of Willy Morgan may not equal the in-your-face fluff of classics like Full Throttle or Grim Fandango, but it is first-rate throughout with an elaborate soundtrack and convincing voice acting. Conversations with other characters are carried out by selecting topics or choosing items to talk about. The method is simple enough but somewhat limiting since you can only talk about objects you have on you rather than choosing what you want to say.

The animated graphics are crisp and clear and the artwork is outstanding.

Chilly willy for the win

The game only has one drawback but it is worth mentioning as it keeps doing just enough from establishing Willy as a bonafide classic. The drawback with the game is that it is very short by contrast to other games and seasoned veterans will probably finish it up in under three hours or so.

To be quite honest with you, I was hesitant at first to try out the game as I’ve been burnt before on adventure titles especially from developers that tried (albeit with good intention) to bring something new to the genre. It’s hard to forget that the majority of all games have looked great on paper then fail miserably on execution.

Thankfully, Willy Morgan and the Curse of Bone Town did not disappoint and it provided all the right ingredients and kept me entertained while offering a wonderful sense of accomplishment that very few games provide. If you enjoy adventure games, little Willy is your man.